Following the approval of the Conventiopn between the Ministry for Foreign Affairs and the Umbria Regional Authority regarding the project “Palestinian Arbitration Chamber” (Ministerial Decree No. 2010/333/003973/0 of 8.10.2010), the result of a project of strategic decntralised cooperation to construct the Palestinian State and to support the development of the private sector, in November 2011, a Technical Agreement was signed  between the Umbria Regional Authority and Sviluppumbria with the objective of creating an international arbitration chamber and to guarantee the relevant technical assistance.
Sviluppumbria was identified as the actuator of the project and worked alongside the nominated Project Leader and local staff throughout to implement an organisation with head office in Ramallah on the West Bank, named PIAC (Palestinian International Arbitration Chamber), to offer legal protection in the Palestinian Territories and conditions of economic safety to support local and foreign enterprises operating in that area, by supplying via arbitration an efficient means to resolve commercial controversies outside court.
The scientific management of the Chamber was entrusted to the Faculty of Law of the University of Perugia, which envisaged training for arbitration judges and Palestinian lawyers to start with the objective of becoming fully operative.

On 4 June 2013 the Statute of the PIAC was presented before the President of the Umbria Regional Authority, Catiuscia Marini, whereas the official inauguration of the head office was held on 4 September 2013 in the presence of the Deputy Minister for Foreign Affairs, Lapo Pistelli, the Italian diplomatic and technical Authorities and the Palestinian entrepreneurs (local partners).
With an autonomous, independent, efficient and authoritative, internationally acknowledged Arbitration Chamber, the possibility to establish reciprocal economic and commercial relations that will be beneficial and guaranteed between the two countries was facilitated.

Official website of PIAC: http://www.piac.ps/
Read the dedicated article in the local press 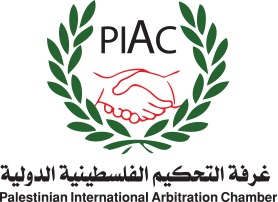